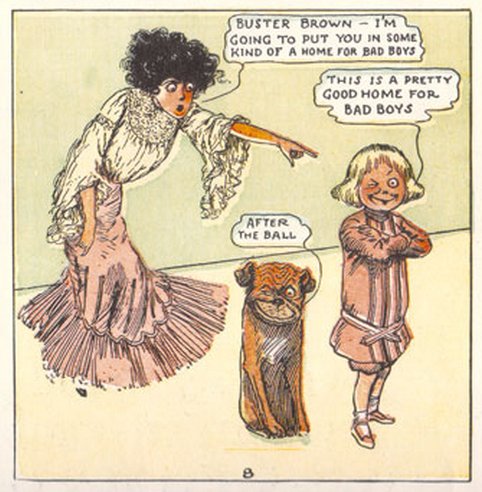 Many of the most well-known comics protagonists have pets or animal friends, loyal sidekicks in their daily lives and adventures: Charlie Brown has Snoopy, his independent, precocious dog, Calvin has Hobbes, a stuffed tiger acquiring life through the boy’s imagination, Beano’s Dennis the Menace eventually acquired an equally destructve canine companion called Gnasher, Tintin (successfully eluding the adult-child distinction, but remaining in many ways a child with a degree of agency accorded only to adults) has Snowy. Already the Yellow Kid was accompanied by several stray dogs, cats and other animals, who accentuated the action and the humor. Decades later, the importance of animal sidekicks persist, as exemplified by the series devoted to Spirou’s fantastic, semi-domestic Marsupilami. That these children and their animal friends combine characteristics of both adults and children not only accounts for their appeal to a broad audience but also highlights the complexity underlying these characters in spite of their flattened, polyvalent essence. Thus, for Umberto Eco, « Schulz’s children create a litle universe in which our tragedy and our comedy are performed » and « Snoopy carries to the last metaphysical frontier the neurotic failure to adjust ».

Even though child-animal relationships have been a staple of comics production, they remain overlooked by comics scholarship, which is only tentatively broaching the study of children and comics, as exemplified by recent publications (Abate and Sanders; Gordon; Heimermann and Tullis). In expanding on this existing scholarship and combining it with studies on picture books and comics as well as animals in comics (Groensteen; Hatfield; Hatfield and Svonkin; Sanders), this anthology seeks to build stronger bridges between the fields of comics studies, childhood studies and animal studies in order to take a first step towards a more profound and holistic understanding of the roles and relationships of animals and children in comics. It is particularly interested in historical studies (from the mid-nineteenth century onwards) and transcultural comparisons of child-animal relationships in comics that engage with one or more of the following aspects:

The volume will be published in late 2018 by the University Press of Liège as part of the ACME series on comics studies.